Last night around midnight I found myself sitting on the front porch with my mind jumping from one topic to another. I was so wound up I just had to get away. So I jumped into my car drove west of town about ten miles to a little spot by the North Platte River. I parked the car off the side of the road and with my trusty little flashlight walked the trail about forty to thirty yards down to the river bank. I sat down on a rock and gazed out at the river and the starry night that was stretched out before me.

About three months ago my wife and I discovered this little isolated corner of Wyoming. I was enamored by the river and beauty around it. So much so that when feeling troubled, I would secretly come to it to ease my mind. It always had a calming effect upon me and last night it worked its magic. Within ten minutes of sitting on that rock I was relaxed and at peace with both myself and the world.

The mountain lion stopped in the middle of the trail between me and my car. He turned his head and stared at me. He was about ten yards in front of me and from the light from my little flashlight I could see every hair on his body. His greenish yellow eyes seemed not evil but menacing. For what seemed like a minute or two we both just stood there staring at each other.

I remember wondering if I should not shine the flashlight on him. I thought “oh my God I am going to be eaten by a mountain lion”. Then oddly I felt embarrassed. I was wearing off white pants, a black and cream Hawaiian shirt and covering my feet were house slippers. If I am going to die in Wyoming I should not have these types of clothes on.

They say when confronted by a mountain lion you should make yourself big and make loud sounds. But all I could think of was the song “Bottle of Wine” written I believe by Tom Paxton and made famous by Jimmy Gilmer and the Fireballs. So I started loudly singing that song and moving my shoulders to the beat of the song.

The mountain lion either did not like my singing (which most people don’t) or he just got bored with me. By the time I started the second verse he just walked away. I walked back to the river’s edge figuring if he attacked me there I would jump into the water. I figured I would rather drown in the freezing water than be eaten by a mountain lion. Also I thought he would not follow me into the water.

Using my flashlight I kept scanning the area to see if he was still around. After a while, not seeing any sign of the mountain lion I dashed up the trail to my car. Once I was safe in my car, I started it up and went back home.

Safe in bed I kissed my wife on the check. The kiss woke her up. She stared at me and said” what’s wrong?” I said, “I am just glad to be home”. She patted me and fell back asleep. Oddly enough with all that had just happened, I also fell right to sleep.

The attached photo was taken by me a few years back and I added it for effect. – C. G. 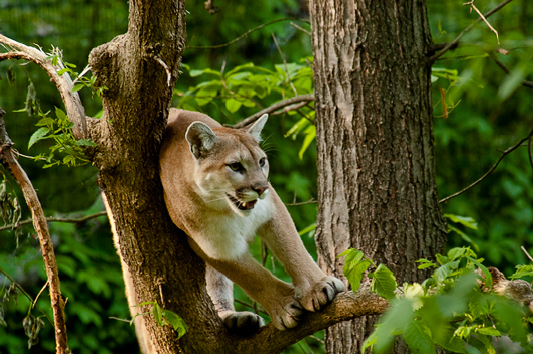 #winter in #illinois at #starvedrockstatepark very very cold. Don’t know how well this will show up on a small screen but makes a really nice print. #winterlandscape #backandwhite #blackandwhitephotography #nikonnofilter #nikonusa #nikond850 #landscapephotography #illinoisstateparks #reflections
While living in #cheyenne #wyoming about every day I would walk down this one alley and there would be a bunch of #alleycats occupying a dilapidated shack. This one #feline would stare at me and follow my movements like a hawk. One time I thought he was going to pounce on me. He never did that but he never ignored me. Four pics to give you an idea of what it was like walking by that cat and shack. #alleycat #cat #catsofinstagram #catstagram #catlover #feral #feralcatsofinstagram #feralcats #nikonusa #alley #alleyphotography #wildlifeinthecity #nikonv1
Going down memory lane. This photo is from years ago. Film days. Title is “Family Minus One” the Dog’s name: Humphrey. Great dog. When he passed on I cried like I had just lost a loved family member. Darn pets, they don’t outlive us. This is one of my favorite photos. Hey this is one of those photos of people shot from behind. I was ahead of my time. 🤔 #momentsintime #kodakmoment #kodaktmax100 #streetphotography #blackandwhitephotography #filmphotography #nikonusa #nikonnofilter #family
Don’t usually post pics like this but was looking through some old photos and saw this and just had to post. This is from a few years ago and yes it is me. Actually it is the last pic of me that I really like. Thank you April for taking this and doing something to make me laugh. No hashtags here just a fond memory. Okay one hashtag: #fujifilmxt1 I loved that little camera
A little photo of an #elk taken a few weeks ago in #rockymountainnationalpark #rmnp taken with the #nikond500 and the #nikkor200_500 I posted this photo on my blog along with an article of why I will never be a really good wildlife photographer. I am not real good at self promoting 😀 #coloradowildlife #ournationalparks #nikonphotography #nikonnofilter #coloradonationalparks #coloradophotography #blackandwhitephotography #usinterior
Another #wyoming at night photograph. #nightphotography #nightsky #wyomingskies #wyomingatnight #wyominglandscape #wyomingnightsky #nikonusa #nikond300 #nikonnightphotography

Photographing An Elk And MoreHmmm, about twelve years ago when we moved from Illinois to the west I...January 18, 2021

The CLG Photography team of April and Craig

Craig has been a professional photographer for over forty years. His photos have been shown and purchased in four continents, North America, South America, Europe, and Asia. Just recently his wife April has joined C. L. Getchius Photography. A quote from Craig and April: “Even after all these years we are learning and are excited about what we will discover and witness with each new day.”